Fundão, Portugal (Gastrosofie). Whoever will hike in the Serra da Gardunha must be hungry after only one of the dozen or so round trips along the friendly, fruitful fringe of Portugal, recommended to strangers in books and maps alike. Taking it that you happen to be hiking on the Rota da Pedra D`Hera, that’s 5.4 kilometres to go with 144 meters difference in altitude – easily to be do in one, two hours, some say – then for sure, when you walk out of the woods and downhill to Fundão, a good eat is what is needed to be found.

From the other routes, such as the Rota do Carvalhal (12.6 km, 4 to 5 hours) or the Rota da Gardunha (17.4 km, well over 5 hours) you better go by bike, motorbike or car to Fundão. The city, which made it from villa (small town) to cidade (city) in 1988, lies only a handful of kilometres from the motorway (A 23) and can also be reached by rail since over 100 years. It is located on the Linha da Beira Baixa, which leads from the south: Entroncamento, whose inhabitants maintain a town twinning with the Hessian Friedberg, up to the north: Guarda, district capital in old province Beira Alta, whose “Guardians” against Spain of old have a partnership with Siegburg. This Line is connected to the state railway network of Comboios de Portugal.

Many roads lead to Fundão, where, in the middle of the city, there stands an old, high and essentially plain house on the cobbled main street. The Restaurante Hermínia is housed in two out of five floors. In front of the restaurant, whose terrace is not only covered but also completely window-paned, two trees rise up that provide a welcoming shade in summer. The green of the foliage, already strong in April, matches the light beige of the house façade, where ochre yellow painted applications and small balconies are placed. And the large glass façade, which extends from floor to ceiling, can be unlocked at any time and pushed aside when a gentle breeze blows. Everything then is there to please guests from near and far.

The food served is very likely to appeal to all guests, as according to one of the waiters, it’s the best buy of the Beira Baixa, the lower border area province bordering Beira Alta in the north, the Beira Litoral in the west and Castillian Spain in the east.

There is room for 80 in the restaurant, but certainly not so much space in their bellies as tables can carry of regional specialities.

Among the delicious dishes are fried kids, Carqueja rice, Maranho, Ensopado de Borrego or Tibórnia. As Entrada we Gastrosophicals recommend a Salada de Grão e Bacalhau. To enjoy cold cod even more add a splash of local virgin olive oil, then go for the soup it’s Sopa à Beira Baixa. Whatever the ingredients, it always tastes very well, from the first dipping of the big spoon in company to the last.

For the main course the choice is between Peixe (fish) and Carne (meat), even if you can’t really nourish more. Tibórnia à Lagareiro (bacalhau, couves e batatas em azeite virgem, ie cod, cabbage and potatoes) and Polvo Rei com Castanhas (octopus with chestnuts) were served at the large round table on the Belle Etage, but also Naco à Serrana and Bife Alcatra com Feijão Manteiga em Azeite Virgem. If you can still stick to it after the steak, dedicate yourself to devour a dessert called Sobremesa.

Now Pastéis de Nata are placed on the table, but also Degustação de Doces Regionais. You just have to try both, no way out, and let Vinhos da Região be served to the menu, please. It doesn’t always have to be wine from Alto Douro, remember.

If you desire having another glass of wine, then instead of chewing sweets with Galão or another coffee specialty do choose Queijos Regionais. The cheeses from the region are delicious, and for you to discover in a further feature of Gastrosofie.
Maybe a hike after the meal would be a good idea. On the Rota da Penha you go straight up to two peaks. Taste the scenery!

The research was supported by: AHRESP, República Portuguesa and Visit Portugal. Text based on an article by Ole Bolle. 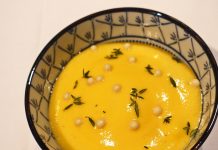 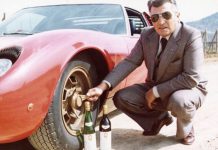 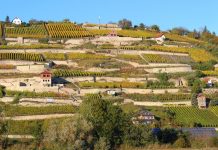 A happy hunter in Friedrichshain – The Jäger & Lustig, since...