Berlin, Deutschland (Gastrosofie). On the nicko cruises flagship, the 47-year-old Indian is partly responsible for the good mood. You know that a lot depends on the quality and variety of food during a cruise. He is responsible for this as a “chef-cook”, as he is popularly called. In professional circles he is referred to as “Executive”, “Executive Chef” or simply “Chef”.

Bheirav Panchal represents a 95-strong team of kitchen staff who he briefs at the meeting every day.

He coordinates the specifications and menus of the shipping company or tour operator, with his staff at the herds being the executors.

Of course, you’re not born as a boss, but you have to walk a long way to get to the top.

In 1975, he was born in Bombay, now Mumbay. Already during high school he helped his uncle in the racecourse restaurant of the Ganges metropolis. After graduating, he studied hotel management. With an excellent certificate he left the school after four years and got a job in the prestigious “Taj Mahal” hotel in his hometown. Until the big, wide world lured him. In 1999, he joined Disney Cruises and the Holland America Line. After only eight years, he had made it to executive chef. A remarkably steep career! In 2009, he moved to Celebrity Cruises, where he remained until 2012. He was signed to Prima Cruises Ships for another six years. He and his wife have two children, a 20-year-old who follows in his father’s footsteps, and a 12-year-old who is contemplating a professional football career.

After 20 years on board, the friendly man was pulled back ashore. The family had priority at first, but soon he had to be active again in his beloved profession. “I finally wanted to have my own restaurant”, he smiles, and opened the “Sumac” in Mumbay. Of course, Indian cuisine was at the top, but “because there are many similarities with Lebanese cooking culture, I included oriental variants”, he explains, “and I was absolutely right, “because soon we were known for our modern haute cuisine in the city.”

Business stagnated for eight months, “so I had to think about how I could continue to feed my family”. In 2021 Bhairav Panchal accepted an offer from the Portuguese shipping company Mystic Cruises to join the “Vasco da Gama”. He is satisfied with his decision to reopen the “Sumac”. He wants to stay on board the 55,000-tonne vessel for three to four years, constantly expanding and refining his knowledge and knowledge.

Cook with the heart

For him, the question is not whether something is difficult or easy to prepare: “You just have to cook it with your heart, then you will succeed!” There are differences when it comes to large or small quantities, “whether you cook for a few or many guests”. Currently, he has to feed 680 guests and 420 crew members a day. “That’s 4000 guest meals and 2000 for the crew. What’s needed? For example, 3000 eggs, 150 kilos of chicken, 150 kilos of meat, 100 kilos of fish and 100 kilos of fish. Kilo of vegetables a day.

What criteria are used to create the menu plan? Safety is the number one rule: “Cold food should be cold, hot food! Every meat has a different temperature. This has to be taken into account just because of the bacteria. This follows the general food standard”. Due to procurement logistics, the office defines the menu plan: “There are no discussions on board!” Before the goods come on board, they are checked according to the strictest quality standards. There are no compromises!”

He wants to learn even more about the “science of spices, because they are very complex and characteristic in Indian cuisine.” Here you have to balance between spiciness and flavours. “Moreover, it is not only in this respect that worlds lie between North and South India.”

What is his favourite dish? In addition to Kingfish – Kingfish cooked in a clay oven, previously marinated and seasoned – it is above all the “butter chicken.” 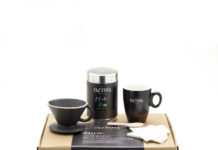 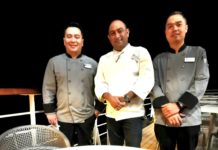