Trani, Apulia, Italy (Gastrosofie). As a teenager, Stefano Di Gennaro tied his apron, graduated from the Molfetta hotel management school and left Apulen. Years of apprenticeship and traveling followed, until in August 2011 he found the Ristorante Quintessenza at the port of Trani on the Adriatic Sea, a place between Bisceglie and Barletta a few kilometers north of Bari.

But Stefano would be nothing without Saverio, Alessandro and Domenico Di Gennaro. Together are the La Famiglia. One knows his way around wines and is a sommelier, the other one with olives, vegetables and fruit and is a farmer, one waiter and one cooks. It is said that only the best of the soil is put on the table. But in addition to the territory, tradition is also important and is passed on. It is no wonder that the Quintessenza Ristorante is praised and La Famiglia is honored with awards. There was even a Michelin star in November 2016.

And there is a menu that is offered for the entire table. Six courses without accompanying drinks are offered for 85 euros per person, the accompanying wine costs 40 euros per person. Of course, guests can also choose à la carte and after an aperitivo they can put together delicious dishes from crudi such as ricciola marinata, bidola ed agrumi, antipasti such as crudo e cotto di mare: pesci, crostacei e frutti di mare, primi piatti such as risotto seppia e piselli, Secondi Piatti such as Astice blu, melanzana e pomodoro as well as Doldie and Formaggi. No question about it: the digestivo shouldn’t be missing. For digestion and health in a fine dining restaurant 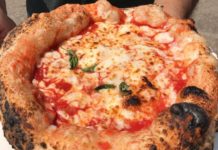