Berlin, Germany (Gastrosofie). A pot of seasonal herbs has been placed on each table. These „you harvest fresh every day“ is written on the paper place mat. The guest only needs to go for a grab to refine their dish. The Cologne restaurant chain Vapiano at home in 33 countries relies on fresh herbs and above all on a breath of fresh air, as the recent live event in the Vapiano restaurant on Friedrichstraße in Berlin wanted to prove. It is also sorely needed. The mood of the guests and the share price had plummeted. The chain had expanded considerably, but had lost sight of the guests‘ concerns. Soon it got into the news: Manipulated shelf life data for food; mice in the kitchen; cheap shrimp instead of expensive scampi; waiting times too long. All of this caused a significant loss of trust among customers. And the employees complained about working too long hours and too much pressure.

A new menu and a new ordering system are now in operation to address it. Orders are planned at a digital order point or, more personally, at a central order point staffed by an employee. A faster ordering and preparation process should help guests get their dishes up to 50 per cent faster.

Vapiano also focus on current food trends. For example, a vegan pope – and Germany’s only butcher awarded a Michelin star were invited to the opening event. TV chef and cookbook author Stina Spiegelberg and Wolfgang Müller on show in the kitchen, carving, sizzling and explaining. While Wolfgang Müller chooses the reef’n beef with beef fillet and lobster sauce, Stina Spiegelberg opts for a vegan crema di funghi with pappardelle, mushrooms, parsley, onions and white wine.

The employees serve bowls with salmon, lettuce, radishes, carrots, cucumber and spring onions in advance. Mango is also included, and a lime and chilli dressing. After this really successful vitamin bomb there comes pizza, burrata or vegetarian, including grilled artichokes. Wolfgang Müller believes that no one should say that Germans cannot pizza. It tastes better than some Italians, he says. He himself goes to Vapiano often, too, he assures. More advertising is hardly possible. Now his colleague is serving her crema di funghi: totally vegan, thanks to an appropriate cooking cream. In terms of taste, there is some room for improvement. The mushroom aroma is barely noticeable, and a little spice could not have hurt either. Half as wild, the herbs on the table will fix it.

Text based on an article by Fritz Hermann Köser. 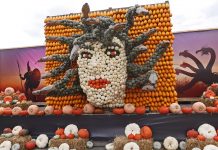 A thumping pumpkin show – lots to see, taste and buy at the Spargel- und Erlebnishof Klaistow 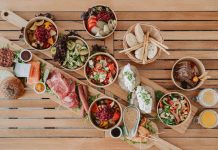 „To be put in the pit without having enjoyed a mouthful of good meat is inhuman“ – gourmet grill boxes from „Brechts“ and “Ganymed”:... 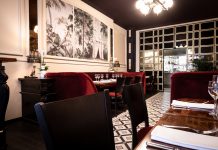